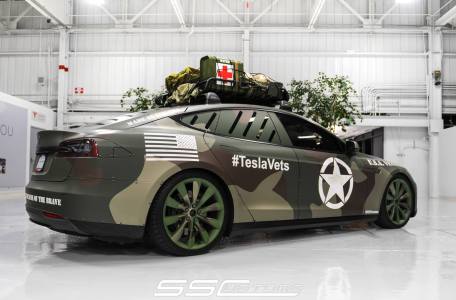 When the shtf are you going to rely on the same car you use to get to work and  home everyday to take you through what could be the most tretorous and dangerous terain of your life? Or are you going to have an ace in the hole with your custom bug out ride?

While the concept of a bug out vehicle is great for those that have the time an money to put a custom job together, but that's just not possible for everyone. Here at Survive The Wild we want to show you that with a little dedication you can make your own bug out vehicles! This one might look complicated, but all it is is an extended bed added to an old school double cab truck. That's all mounted on what looks like a military wheel setup. So basically they took the top off of a military surplus vehicle and mounted Bubba Jays Ford in it's place.

As for the grill of the truck it's just two grills from what looks like Ford Rangers. There's also the extra fuel containers, which are worth their weight in gold when you need to limit your fuel stops. The only thing that separates this from just another old school pickup on the road is the external roll cage with a mounted cable tow.

This is a great move By Mike Penhall who put in just over $6,800 in repairs and upgrades to this 4 Runner! The external roll cage has to be one of the best ideas for a  bug out vehicle we've seen so far.

All Terrain BUG of Bug Out Vehicles If you're looking to bug out to a rugged area, but need to do it quickly and have something to drive when you're there, this is one to invest in!

Another great use of the external roll cage is a great addition for this rugged terrain beast. The speed and handling this bug could offer are priceless in wooded or rocky terrain, the juice seems to be well worth the squeeze! Not to mention it just looks so awesome! If there's something the riot police do so right, is that they have vehicles designed specifically for getting through crowds of angry people, which is exactly what you need! So why not find one of these retired bad boys for sale, fix it up and  put it to good use.

With bullet proof glass and steel this bug out vehicle isn't going to be slowed by much of anything! If you're all out of extra spending money and you happen to have one of these that you're looking to sell, just hold on to it and repurpose it! Spend the money to make it good enough to get you far away from the action, add a few custom lights, and upgrade to heavy duty tires.

Now you've got a noteworthy bug out vehicle without having to buy a new car!

The Camo Bug Out Cart Here we go! Go get you a used military humvee and with about $4,000 in extras you can have yourself an amazing bug out vehicle in no time!

And since you're buying from the military you know that this thing has been battle tested and approved. The only suggestion would be to replace the tires and add a roof. While it looks cool for the pictures and curb appeal, bugging out in the rain is a likely scenario,  no need to make it more uncomfortable than it already is.

4 Runner All Over You This is a thing of beauty. The modern appeal of comfort and style, fused with the grungy armour of an impending apocalyptic nightmare!

From front to back and top to bottom, this 4 runner will run over anything in it's path thanks to the custom wheel guards, grill, and extended back bumper. If you have a welding friend this is a very possible kit to put together on most vehicles to bug out. If the price isn't much of a barrier to your bug out vehicle then you might want to look at something like this. The old school Land Rovers are known for being solid metal and basically unstoppable once they get rolling. Making it an incredible toy!

The upgrades will set you back about what it would cost to buy a new car off the lot now. But combining the old school toughness with new school tech makes this thing a formidable bug out vehicle choice for sure! This is the third time a 4 Runner has been mentioned, I hope you're starting to see which is the most relliable for bug out vehicles now... Anyway, a modified 4 Runner can be your greatest asset if you need to move FAST.

So please take the hint and look into this for a daily vehicle at least. There's no telling if you're going to be home when the shtf, so you need to have contingencies in place. This but out bike is the perfect example. You can keep one in the trunk of your car or truck at the office, or just keep the extra supplies at work to attach to the bike when you need it.

Either way this bike at work could get you enough distance from danger quickly to avoid the worst of a shtf scenario. An FJ Cruiser is basically a box that's meant to handle some nasty terrain better than anyother stock vehicle out there. Which makes it the perfect choice for a 9-5 desk jockey who might not have all the time in the world to invest in rebuilding their own bug out vehicle.

With about $2,500 and a few long weekends you'll have a ready to go FJ Bruiser! Finally there's the old faithful Jeep. This is generally what the public thinks when they think "bug out vehicle". And for good reason, the customization potential of these bad boys is insane! As you can see there's mounted gun turrets available, tow cables, aggressive grill guards and much more to satisfy your taste of danger.

A Jeep Grand Cherokee is one that you just can't go wrong with if you're going to invest in a quality bug out vehicle.