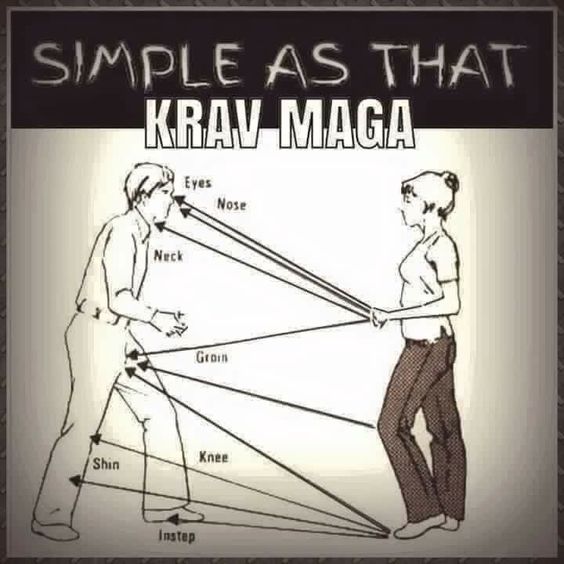 As the story goes with most men, we're fighters and hunters by nature. So wanting to learn a form of PRACTICAL martial arts shouldn't come as too big of a surprise, and the Israeli Martial Arts of Krav-Maga is about as bad ass as it gets! Along with sambo (russian martial arts), this style of fighting is meant for use on the streets and not restricted by pretty form and colored belts.

The measure of your success in this fighting style is how quickly and effectively you can subdue your opponent. Which is why it's the perfect fighting style to learn for a post SHTF era. In a time when rules won't be enforced and police are nowhere to be found, a "fair fight" won't exist and you'll need to do all you can do to defend your family when the time comes. So we're going to dive deep into this form of fighting to glean as much as we can to help you decide if this is something you'd like to pursue on your own.

Although Krav Maga is an Israeli form of self defense nowadays, it was born in the heart of Czechoslovakia. This fighting style was created by a renown boxer, gymnast, swimmer, and wrestler named Imi Lichtenfeld.  Imi created this fighting style with a group of rag tag members of his community out of a need to fight back against the fascist and anti-semetic groups that had risen to power in Czechoslovakia. However he soon realized that his training of knowing how to score points in a match would not get him very far when it came to battling thugs on the street. So he had to revamp his approach to be more effective than structurally sound.

So emphasis was improved on moves that would quickly disable the opponent with minimal effort instead of strict fighting styles he'd learned from other martial arts. And with this a practical and effective fighting style came into being, called krav maga. Imi soon proved his abilities against the Czechoslovakians and later the Nazis as they moved in to assume political control of his country.

And upon joining forces with the Haganah (a pre-Israel Jewish paramilitary organization with a mission to protect Jewish settlers from locals who did not welcome the new arrivals), and Imi gained the attention of the Israeli military which later put him in charge of training their elite fighting forces with his style of martial arts.

Later on he began to provide training to what became the IDF (Israeli Defense Forces), this group helped to coin Imi's fighting style as Krav Maga. And this fighting style has since been used to help citizens and average joes and janes become prepared for many street fight scenarios.

Now just because this fighting style is meant for some thug level violence, doesn't mean that the ones that teach it encourage students to actively seek confrontation. Which is why most counter attacks are made from a position that would seem weak, like when you put your hands up to say you don't want any trouble.

However, you're going to run into those who are themselves LOOKING for trouble, and in these situations you'll need to know how to protect yourself and your family. Krav Maga is a tactical mixed-martial art/combative and self-defense system that combines boxing, judo, jujitsu, and aikido. In recent years, other martial arts have been incorporated into Krav Maga such as muay Thai and Wing Chun.

The focus of this fighting style is to neutralize the threat as quickly as possible, you don't want to give the mountain of a man you just caught off guard time to regain his senses enough to get a hold of you! So when your life is on the line in a street fight just remember that the rules are off the table, and this fighting style is what could make the differece for you.

If you're hoping to learn how to do a triple back handspring into a roundhouse kick that could split mountains you've come to the wrong place. There are no fancy forms or setups here, just producing force fast and hard on your opponent. This was meant to be understood by simple people to protect themselves against military members, it has to be easy to pick up and put down!

Attack Everything at  Once

As much fun as it would be to kick your opponent in the nuts and watch them squirm before you deal a blow to their chin, that's just not practical. Krav Maga teaches instead to attack everything at once, or simultaneously. And on top of that you're trained to go for the most vulnerable parts of the body (eyes, lips, groin, knees, solar plexus, and neck).

This ties into the previous principal in that you're not supposed to attack in segments or trade exchanges. You're in a life and death situation so once you gain the upper hand you need to maximize that momentum and soundly defeat your attacker. As your attacker reacts and counteracts you'll need to keep the attacks coming until they are no longer a threat, this can be done by combining a punch with a headbutt, followed by a knee to the solar plexus, and finished with a blow to the head from the heel when they're down. Again folks, we're assuming you're in a street fight in a post SHTF world and your attackers might not be limited to what you can see right away. If the thug you're taking down is a pawn in a larger baiting scheme that now has you, you need to be aware of what's going on before you get in too deep.

You know what's better than bringing a knife to a fist fight? Taking the knife away from the guy who brought one and ruining his day!

Krav Maga does train you how to use weapons as a SUPPLEMENT to your hand to hand combat training, but you shouldn't rely on having a knife to win the fight. Rather train to take the weapons away from the weenies who brought them. It is taught that you should use everything at your disposal as a weapon.

Going back to maintaining awareness, if you see a frying pan in the room and your attacker has you beat by 120 lbs. don't be afraid to go Looney Toons on him and take him out with a metal dish!

Check out this free short video that will help you prepare yourself and your family from violence that is sure to follow in a post SHTF world. And you'll see that Israeli Martial Arts of Krav Maga aren't the only bad ass techniques out there!